Over the past ten years, Bitcoin has been declared dead 441 times, most recently on 4 January 2022. In fact, there were already several Bitcoin obituaries even more than a decade ago, with the first recorded 'Bitcoin Death' appearing on 15 December 2010, when Bitcoin was worth only $0.23. Entitled “Why Bitcoin can’t be a currency”, the article attempts to explain why Bitcoin will fail because it lacks "any mechanism for dealing with fluctuations in demand."

Over 11 years later, and at approximately $42,000 per coin, Bitcoin is 174,000 times more valuable and is an official currency in at least one country. However, as we enter a bear market phase of Bitcoin's current supercycle, these sensationalist articles are once again making the rounds.

Bitcoin ‘deaths’ over the years

Let's look back on some other dramatic 'deaths' that Bitcoin has managed to survive over the years.

Wired Magazine - "The Rise and Fall of Bitcoin"

In late 2011, after Bitcoin had fallen from a high of $32 back down to $2.37, popular tech mag Wired posted this article predicting its death. The author cited the 93% drop and previous failures like that of Ecash as reasons why Bitcoin will simply be another failed digital cash system.

Ten years later, Bitcoin is 18,000 times more valuable than on the day that article was published, supported by a massive global network of individuals and businesses.

In this somewhat dramatic article, author Kevin Roose claims Bitcoin's "path to the grave" was always fairly clear to him. He cited the failure of one small BTC exchange combined with banks pulling out and a government crackdown on an unrelated payment network as the reasons for his 'clairvoyant' prediction.

Eight and half years later, Bitcoin is stronger than ever, despite multiple attempts by governments around the world to shut it down. Thousands of BTC exchanges operate worldwide and banks regret not adding crypto to their operations earlier.

Not one to mince words, startup founder and VC Pascal Bouvier went straight out and said it: Bitcoin is dead! To his credit, he cited some well-researched 'facts' about Bitcoin, notably its speed, scaling and energy issues.

These issues have been addressed many times in the 6+ years since he published his piece and Bitcoin developers have solved much of the problems. Needless to say, Bitcoin is still going strong and is 150 times more valuable today.

On 21 November 2019, self-described 'fiat enthusiast' and former IMF economist Mark Dow tweeted "Bitcoin is dying". He didn't elaborate on his reasons, but at the time, Bitcoin had fallen from a high of $13,000 to $7,600 over a four-month period. 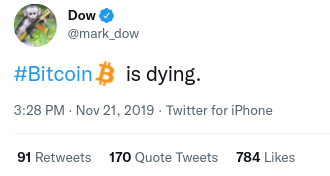 To traditional economists, a loss of nearly 50% would be considered dramatic, but crypto-enthusiasts know these things are only temporary. Less than a year later, Bitcoin was back above $13,000 and soon after broke a new all-time high. Within a few months, it had broken above $60,000 - almost eight times higher than when it was "dying".

RT - Bitcoin heading to $0.00 & many will lose everything when bubble pops – warns investor Peter Schiff

Few people have called for the death of Bitcoin more than Peter Schiff, a sensationalist YouTube blogger, goldbug, and stock broker whose company was once investigated for tax evasion and organized crime. In this article, Schiff calls Bitcoin a "massive speculative bubble" that's "going to trade to zero or pretty close to it when the bubble pops."

Four years later, Bitcoin's new all-time high (ATH) is $69,000 - four times higher than its price was at the time. Schiff continues to predict the death of Bitcoin almost daily via his Twitter account. 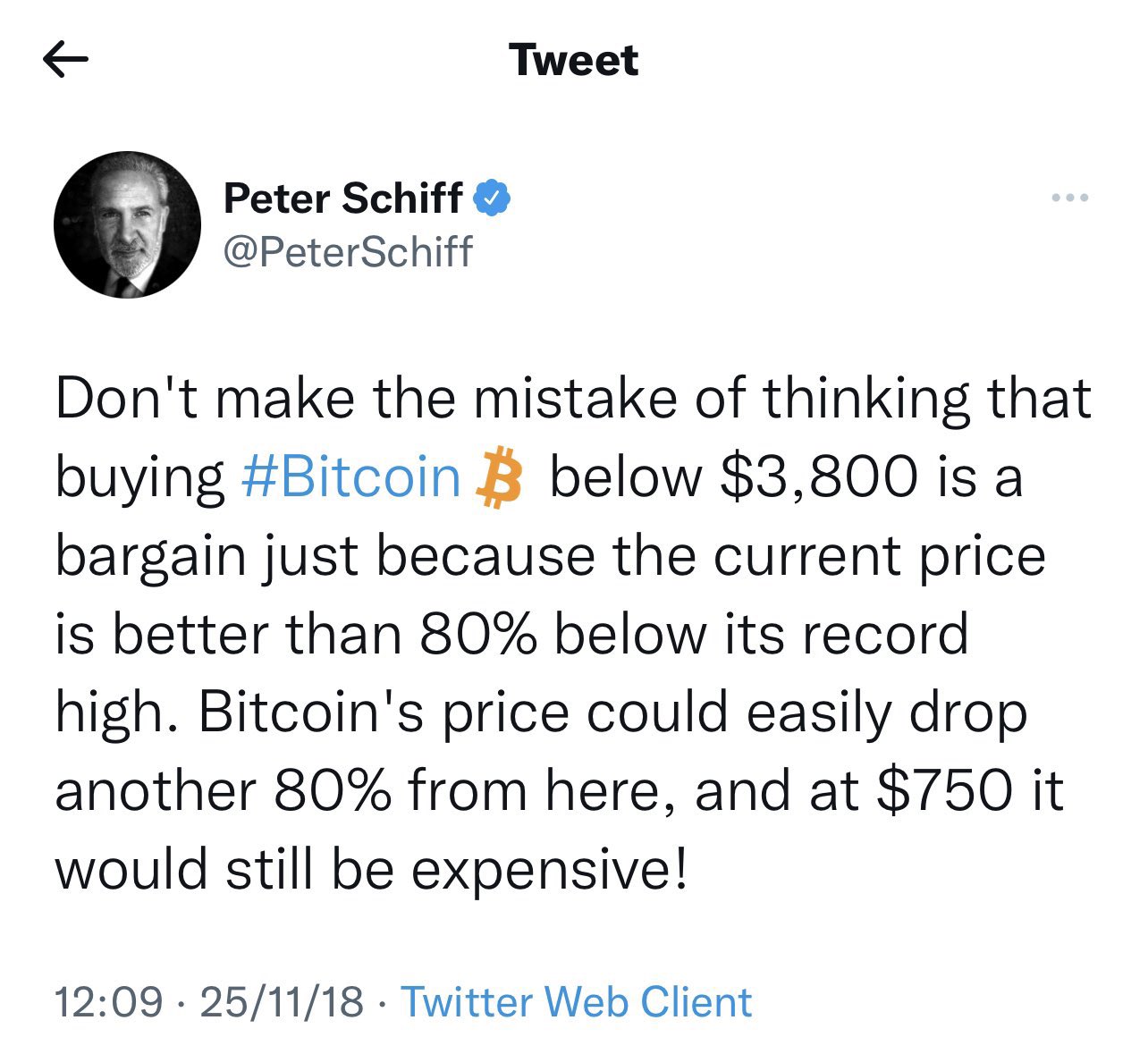 This latest 'crypto is dead' article rehashes the same boring old trope that crypto has 'no fundamental utility' and is based only on the idea that "someone else will come along and pay you more than you spent." The author, who seems to have copied most of the article from previous Bitcoin obituaries, brings up all the same old issues like “volatility”, "pure speculative objects" and "zero intrinsic value." His eventual conclusion? Bitcoin = Fascism. Yes, I'm just as confused as you.

So will Bitcoin actually die this time, or will it live on unfazed as it has done 441 times before? My money is on the latter.